One of the works of thought that tried to touch and examine the way we look at reality, was Plato’s work: “the allegory of the cave” from his “Polita”. In this passage there is a sharp allegory about the very imperfect way in which we see the world: 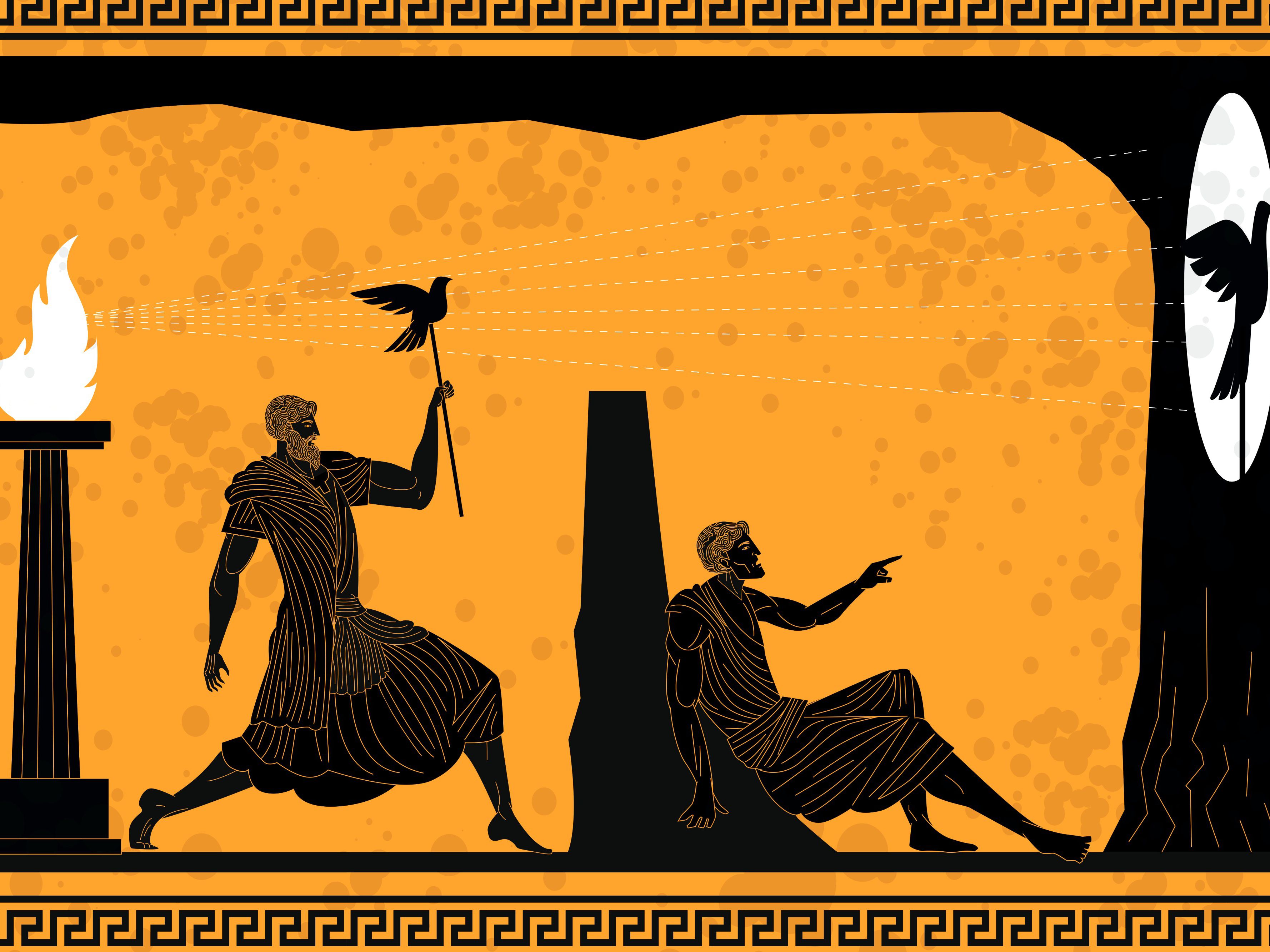 We are likened to people that are born and live bound in a dark underground cave. Our heads are so tightly bound and fixed that we can only see the wall in front of us, on which the shadows of the objects behind us are projected. Because we are so imprisoned there all our days, we imagine in our minds that the shadows we see are real. We are not aware that these are just shadows cast by the objects behind us, lit by the fire behind them. Even the fire that sheds the light that creates the shadows on the wall, is not the primary source. According to Plato, the primary source is the sun (from which the fire comes) and it is above the earth. We are bound there in a cave and not only are we used to it but also prefer it and love it. The biggest difficulty is convincing those who live in the cave to try and break free from the shackles and look back to see the real reality outside. However, looking alone is not enough – the people of the cave have been bound for so long that looking only will not be able to see the light of reality. They must turn their whole body, that is, their whole being.

Plato says that we need someone who has seen the light, the sun, who has come down to us and convinced us – who are in the cave, that we do live in the cave. It is a painful process of revelation, in which one has to deal with the recognition that seeing reality as he sees it is fiction, an illusion. Socrates’ vision was to begin to show human beings that they do not actually see reality as it is at all. And not only that but they do not know and understand what they think they know and understand. It got him in trouble as we know it.

The Indian thinker Patanjali also expresses a similar idea in his “Yoga Sutra”: “We never encounter an objective reality but only the reality as we see it, and more than that – according to what our eyes want to see.”

The question is, is it possible for a man to free himself from the shackles of his slavery in a cave and be able to look directly at outside reality? (Four entered the orchard – it is said in our Jewish sources – and only one came out without going blind – R. Akiva).

And back to Plato.

– Inside you think you see, but you only see the dark image of what really exists. While outside, communicate directly with what is there.

-Outside the cave, everything is understandable, whereas inside the cave when we see reflections of the cause which originates from the outside. We have no ability to understand the world and therefore the world does not make sense.

– Inside the cave, we are bound, the gaze cannot be shifted in any direction, see what must be seen. Outside the cave are free to shift the gaze everywhere.

– Outside the cave is the source of knowledge. Inside – things are just copies, dependent on the original, have no independence, do not derive from anything.

All of these are reminiscent of the way Gurdjieff came to see the world. He sees it in one analogy as a prison, and in another analogy as a basement in a high-rise building. In both cases, we are imprisoned in a narrow, low, and dark worldview. And the trouble is that we think that what we see from the basement or the prison is an illusion. He claims that only escaping from prison, or climbing to the upper floors of the apartment building, will show us reality as it is. (And again the escape or the climb are both allegories for returning to seeing reality in a state of awake and sober consciousness).

The problem here is that this is not about seeing visions, nor about seeing other things we have not seen before. But to see the same things from the level of another level of consciousness. And from there it is the same but completely different. And it is very difficult to explain this to anyone who sees the shadows in the cave. And one example of this is body language: when I come to explain to people about body language, I talk about them seeing the body and I see a body, it’s the same body, only I see the body “out of the cave” – as it is; a communicative medium that conveys psychological and emotional states, but the usual enslaved vision is used to seeing the body in the cave, meaning: through technical constraints and explanations of convenience or through screens of triviality (there is no reason, I am told, he could sit like that, and by chance, he sat like that. For them, it is a shutter, for me a window.

To see the body through body language  is to shed the reflection of environmental causes,  and to see it as a living and dynamic entity that is expressing emotional and inner states. Seeing the body through “body language” is evidence that our vision is free from the shackles and constraints of the  “cave vision”.

So, to see a silhouette, in Plato’s language, is not to see really, to see the thing itself for what it is – could only be obtained only by changing one’s state of consciousness.

A very important concept of developing consciously is one of separating the inner and outer in one’s life. G.I. Gurdjieff, in the words of many of his pupils, was a…
View Post

The following article is elaborating on The Prophet by Gabriel Raam. If you haven’t read that, please read that one first. Although humanity may seem stuck, resistant to change and…
View Post

(An extension and deepening of the essay: The High Goal of Self-Consciousness) Part I: What makes people do extreme, out-of-character deeds? Like taking something little personally, boycotting a kid at…
View Post

First, what is self-consciousness? Self-consciousness is the ability to know what is going on in you and is coming out of you at any given time. We are absolutely sure…
View Post

An opening statement: This essay is written to all those who see their lives as a journey of evolvement, from a point of departure to a point of destination. Part…
View Post

The Quantum State of the Spy

A Human Being and his Purpose/ Destiny in Life